Spurred by the lunch counter sit-ins in Greensboro and by the actions of high school students determined to gain fair and open access to places that served the public, the Freedom Movement in Chapel Hill was supposed to break the way for cities and towns across the South. But, as James Foushee says, “it didn’t happen like that.” He and other leaders quickly discovered that Chapel Hill’s famed liberalism was a “myth.” After almost four years of bitter struggle, Chapel Hill failed to pass ordinances requiring desegregation of places of public accommodation in favor of a gradualist, voluntary approach. But that only catalyzed bigger and stronger protests. For a full timeline of civil rights action in Chapel Hill, 1960-69, see the timeline prepared by the distinguished community members comprising the Historic Civil Rights Commemorations Task Force in 2019. Also see the remarkable photos James Wallace took as a student journalist at UNC (many of these comprise his book with Paul Dickson, Courage in the Moment; some are held by the Smithsonian Museum for African American History and Culture). And listen to firsthand accounts--James Foushee’s recollections of the Holy Week hunger strike on what is now Peace and Justice Plaza and his incarceration in Central Prison in Raleigh; Braxton Foushee’s memories of the meticulous planning of events like the massive street blockade that stopped traffic across town and the critical role women played in the movement; Euyvonne Cotton on how young people marched for parents who’d lose their jobs if they were caught on the picket line, the importance of church leaders like Reverend J. R. Manly, and the community’s commitment to raising bail money; David Mason on the first sit-ins ; and William Carter on regular meetings of the executive committee with Dr. Martin Luther King and the protestors’ complex relationship with arresting police officers, several of whom were cousins and brothers. Search “civil rights” or “freedom movement” and you’ll discover many more oral histories of local freedom fighters. Renew your own commitment to the courage and vision necessary to carry on their work at the neighborhood gateway at the corner of Roberson and Rosemary Streets or at the marker commemorating the Chapel Hill Nine on Franklin Street. 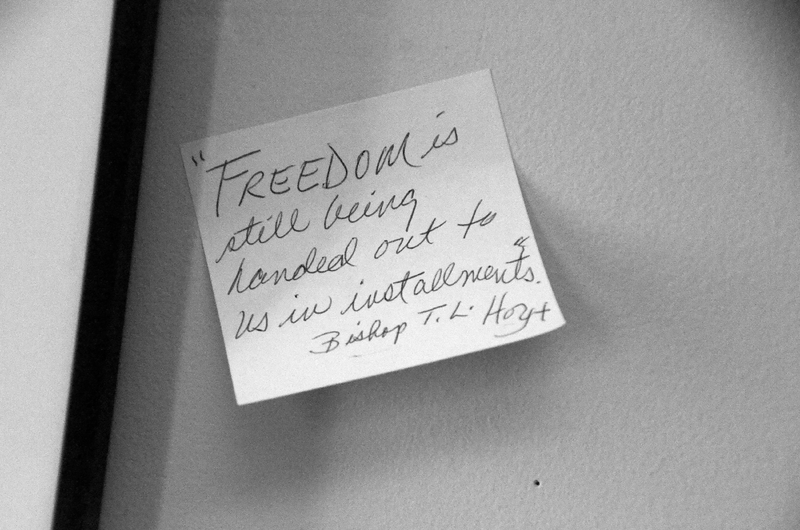 This interview provides a background of Braxton Foushee’s involvement in the Chapel Hill area. He shares his experiences as a committee member during the Civil Rights Movement where he was involved in demonstrations. He describes the various strategies the committee used during the movement as well…
Braxton Foushee - On the Civil Rights Movement and issues facing Chapel Hill

In this interview, Wallace speaks about Civil rights in Chapel Hill, resistance within the movement, and differences of thought. He also talks about Karen Parker, the first black Woman to graduate from UNC. The interview also includes discussion of Jim Wallace’s photos, photos used in schools to…
James "Jim" Wallace - Speaking about the Civil Rights Movement and his photography

Shirley Davis - On her family history and the Civil Rights Movement

William Carter discusses the movement and his background. He was born in the Bronx, New York in 1949 and discusses his heritage with a grandma being a Lumbee Native American and father being an African American. Carter moved back to North Carolina because his aunt was in poor health and he discusses…
William Carter - On school integration and the Civil Rights Movement

Respond
Back to the topics page