Home > Welcome > When and Where > Introduction to Northside History 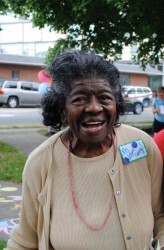 Ms. Velma Perry tracks her family history to the mid-18th century and the day Jesse Hargrave, one of the premiere landowners in an area that was yet to be called “Chapel Hill,” received her enslaved grandparents as a wedding gift. The Hargrave family soon joined with the prominent Morgans and Strowds to donate the land necessary to establish the new University of North Carolina. “And so now they’ve got the property,” Ms. Velma says.  “But you’ve got to put some buildings on it.  And you know who built it?”  She offers a salutary pause.  “The slaves.”

Through the mid-19th century, enslaved Black people on lease or loan from wealthy white residents constructed the University buildings, laid the rock walls, maintained the grounds, hauled water from the iconic Old Well, and cooked and cleaned for the administration, faculty, and students.  Their descendants continued to do so while maintaining small homes and farms on the emerging “west end” of Chapel Hill and beginning to build both a de facto labor settlement for the University and an independent community distinguished by tight networks of home, school, church, and business.

While Ms. Velma and descendants of the Barbee, Booth, Bynum, Caldwell, Edwards, Farrar, Farrington, Fearrington, Geer, Hackney, Hogan, Markham, Mason, Mebane, Neville, Nunn, Parrish, Riggsbee, Snipes, Trice, Webb, Vickers--among so many others--can proudly declare “we didn’t come here; we were born here,” many Northsiders came later. With the turn of the twentieth century, the rise of the railroad, wartime-Depression era costs of living, and the stranglehold of Jim Crow on every aspect of free Black life, southern Blacks joined what would be called the Great Migration to the north, searching for jobs in emerging urban centers.  Some, however, went only as far as Chapel Hill or Carrboro, where they were met by two rising industries:  the flagship University of North Carolina and Carr Mill, one of many textile factories sweeping across the Piedmont region. Both needed labor but the mill town, Carrboro (a Klan bastion named after the renowned white supremacist Julian Carr), remained largely white.  A University that once borrowed and rented slaves to construct its facilities soon became the largest employer of Blacks hired to maintain them.  Some Black landowners managed to maintain large swathes of land in Chatham and Orange Counties in part by performing long hours of manual labor at the University. Many more built homes in Northside and dedicated themselves to subsistence wages of $1/14 hours days in the University laundry or other maintenance “services.”

Northside residents soon became labor and freedom leaders.  They established the Janitorial Association in 1939 and the University mechanics shop in the mid-1940s; in 1969, they led the contentious strike for improved wages and conditions for campus food service workers.   In the early 1960s, teenagers led a bitter struggle for civil rights in a town at once where the first Freedom Riders of 1947--including a young Bayard Rustin--were mobbed and sentenced to months of hard labor.  In 1969, largely due to the leadership of voting rights activists like Rebecca Clark, Howard Lee became the first Black mayor in a majority-white city and the first African American to be elected to such a position in the South since Reconstruction.  In the 1970s, when Northside and Pine Knolls were targeted for “urban renewal” (or what James Baldwin famously called “negro removal”), community members faced down HUD.  They kept many homes from the demolition that destroyed much of the Hayti community in Durham and negotiated for the improvement and construction of others.  At the same time Rogers Road neighbors began a a forty-year battle against the devastating impact of a toxic landfill.

Today Northside, Pine Knolls, and Rogers Road are the most socio-economically diverse areas in southern Orange County.  They are also the most threatened by private investment and displacement.  Like many similar areas across the U.S., the infrastructure of Northside suffered in the wake of desegregation.  Black businesses collapsed; local teachers and school administrators lost their jobs.  White businesses took over west Franklin St and much of Rosemary.  A new generation of young people pursued higher education and better jobs elsewhere or found themselves at sea in increasingly white, wealthy Chapel Hill.  Black flight left some homes unoccupied and in disrepair.

Still, residents continued to fight for their homes, property, and community.  They created a neighborhood watch system and, in 2004, worked with the town to make Northside a Neighborhood Conservation District.  But loopholes and lax enforcement left the community vulnerable.  Oversize construction, predatory sales, and the emergence of a student rental market that thrived on flagrant violation of occupancy codes followed.

While neighbors warmly insist that students have always lived in Northside, they also note that by the late 1990s, the delicate balance between the lifestyles of transient students and those of fourth and fifth generation residents had shifted away from neighborliness to nuisance and neglect.  By 2008, while a luxury, mixed-use condo development rose on the square-block site that formerly housed the vibrant Black business district, the residential area had become what one realty broadside called “hot property” for rental investment and was becoming what one resident called “a big dorm.”  From 1980 to 2010, the number of Black residents in Northside dropped by 40%.  Meanwhile the number of University workers who lived more than ten miles from the University rose to over 60%.

But as Mrs. Gladys Pendergraph Brandon has declared, “we have always been about change.”  The struggle to pursue the right kind of change, the kind of change that honors a history of struggle, hard-won rights, and an ethics of homeplace, continued, resulting in a moratorium on development in 2011, new policies to secure the diversity and vitality of Northside, and the Northside Neighborhood Initiative—a historic, collaboration between the community, university, and town organized by the Marian Cheek Jackson Center.  As of 2020, NNI efforts to balance the market, to educate student tenants, to retain multi-generational families, and to attract new homeowners intent on living close, connected, and proud, has resulted a rising number of Black residents, the creation of forty discrete units of affordable housing, streets once again filled with kids running back and forth across each other’s yards, the return of displaced neighbors, and the renewal of traditions essential to preserving the future of communities whose examples of courage, care, and resilience we lose at our peril.