A Chapel Hill native, David Caldwell is the Project Director and Community Organizer for the Rogers-Eubanks Neighborhood Association located in northern Chapel Hill, North Carolina. As part of his position, he collaborates with UNC in research and works with PORCH and summer enrichment programs to help revitalize the Rogers Road Community. 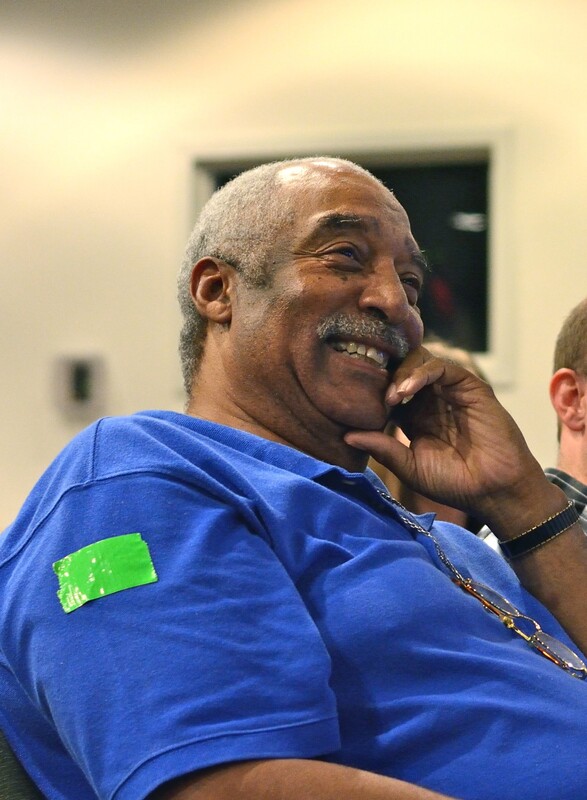 David Caldwell Jr. gives an overview of his life in Chapel Hill and his experiences in the US Army and his other occupations. He begins by talking about his family and what his community looked like growing up, as well as describing other different families in the community. Mr. Caldwell shares stories about what children did in the community when he was younger and recalls times spent working and having fun. He also tells stories of his experiences in the army and his other occupations, including security services. Mr. Caldwell discusses how he tries to give back to his community and provides ideas about ways to improve community involvement.

"That's what I try to instill, doing what’s right when no one is looking."

David Caldwell is a native of Chapel Hill and long time community organizer and activist in the Rogers Road community. Mr. Caldwell brought materials to be scanned during the interview, and large portions of the interview related to those materials, which included photographs, maps, and newspaper clippings among other materials. The materials covered a range of topics which were discussed throughout the interview. The interview begins with Caldwell explaining the historical items he brought, their origins, and his vision for the usage of the materials. Throughout the interview he discusses his family’s involvement in law enforcement and in military service. Caldwell tells several stories related to the Invasion of Grenada, racial demographics and dynamics of the military, and the treatment of Black veterans. At various points during the interview Caldwell discusses his education growing up in Chapel Hill. He recalls the importance of education, as well as the sports he played while in middle and high school. Caldwell recalls his civics teacher, Joyce Clayton, who began a Black history class at Chapel Hill High School and remembers her as an inspiration. Throughout the interview, Caldwell describes the materials he has related to the history of Orange county and discusses the history of poor houses within the county. Towards the end of the interview, Caldwell tells the story of him and his friends playing pick-up basketball against some UNC football and basketball players while they were in high school. The interview confluences with Caldwell discussing the racial dynamics of playing sports in Chapel Hill including discussing the football game played between Chapel Hill High School and Lincoln High School before integration, his lack of access to courts to play on, and police involvement in pick up games with UNC players.

In this interview, the second of two 2017 interviews conducted by Andrea Wuerth, David Caldwell, Jr., discusses his experiences in the newly-integrated Chapel Hill High School. He remembers the difficult early years, describing his accidental role in the riots that took place in Fall 1971, his relationships with other students, and playing football for the Wildcats. He also returns to a previous discussion about his family life especially his father, one of the first Black policemen in Chapel Hill; his mother, a “strong” woman who worked as a maid for the Carmichael family; and his Uncle Hilliard, a civil rights movement leader. He also discusses his experiences with race when he served in the military police and, when he returned from duty, in Chapel Hill. Caldwell shares his views on the town and school system; the importance of remembering local history “so we don’t repeat it”; the importance of voting and activism; and the need to keep up pressure for change on behalf of his community.

In this interview, David Caldwell, Jr., begins by discussing past generations of Caldwells that came from Chatham County and lived first on Merritt Mill Road, then Durham, then Northside. His family moved to Rogers Road in 1963 when land became available to African-Americans. A major topic is the role that his father, one of the first black police officers and uncle, one of the key, local civil rights activists, played in his life and in the history of Chapel Hill. From them, he learned that there are different sides to every story and that it is important to consider all. He also discusses his mother’s various jobs as housekeeper and, later, as a nurse’s aid. He mentions other positions his dad held, including owning his own trash collecting business. In a few stories, he makes it clear that his parents were very hardworking and determined to overcome racism and advance. Finally, he talks about what it meant to grow up as a son of a local policeman and how he decided to join the force. He expresses his concern with law enforcement today and his doubts about his children’s and grandchildren’s futures in Chapel Hill. Success depends upon education and opportunities for seeing the world beyond the town.

This interview is part of an SOHP project called Rural South: Backways: Understanding Segregation in the Rural South. The interviews, 2014-, were conducted in the rural piedmont region and eastern North Carolina about the often hidden forces of structural and institutional discrimination that have outlasted the victories of the civil rights movement. The project explores space, place, and identity and examines issues like poverty, crime, and racial segregation.
David Caldwell is a retired sheriff's officer who recounts the changes of the Rogers Road-Eubank neighborhood in Orange County, N.C. over four decades as they relate to the introduction of a landfill and increased housing density. Caldwell has been active in social justice work in his community as a leader of both the Rogers-Eubank Neighborhood Association (RENA) and the Coalition to End Environmental Racism (RENA-CEER). Caldwell discusses ongoing difficult interaction with the local government as the Rogers-Eubank community has voiced concern and organized against the effects of the landfill. He recounts Rogers Roads being a green and lush area during his youth and how it became less so with the landfill and housing development. RENA-CEER is a leader amongst community organizations combating environmental racism.
Find out more

In the interview, Caldwell touches on the following points: his early family life on Rogers Road, which was underdeveloped and exploited; his experiences of discrimination and inequality at Phillips Middle School and Chapel Hill High; attending NCCU on a basketball scholarship; time in the air force; serving Chapel Hill as a deputy sheriff; earned second Bachelor’s degree in criminal justice from Mt. Olive; very involved in community service; very close and understanding family; friends in civil rights marches; companies threatening Rogers Road community; and his involvement in his church’s events, planning trips and events. Caldwell also suggests some life lessons toward the end of the interview, saying that one must get an education and stay informed to make a lasting impact, and encourages people to return to Chapel Hill after college to stimulate local economy. He has high hopes for further development into the future.

During this interview David Caldwell led a walking tour of the landfill and community of Rogers Road in Orange County, North Carolina. A long-term resident of the historically Black community, David is the Project Director and Community Organizer at Rogers Road. He shows the landfill, the woods in which the streams are contaminated by runoff from the red dirt (caused by the landfill), a historical cemetery, an enslaver's home, and the residential communities. David has rich knowledge and experience with the history of Rogers Road. He speaks on the loss of community, the loss of natural beauty, and of environmental racism.