Interviewed by Darius Scott on September 23, 2014

This interview is part of an SOHP project called Rural South: Backways: Understanding Segregation in the Rural South. The interviews, 2014-, were conducted in the rural piedmont region and eastern North Carolina about the often hidden forces of structural and institutional discrimination that have outlasted the victories of the civil rights movement. The project explores space, place, and identity and examines issues like poverty, crime, and racial segregation.
David Caldwell is a retired sheriff's officer who recounts the changes of the Rogers Road-Eubank neighborhood in Orange County, N.C. over four decades as they relate to the introduction of a landfill and increased housing density. Caldwell has been active in social justice work in his community as a leader of both the Rogers-Eubank Neighborhood Association (RENA) and the Coalition to End Environmental Racism (RENA-CEER). Caldwell discusses ongoing difficult interaction with the local government as the Rogers-Eubank community has voiced concern and organized against the effects of the landfill. He recounts Rogers Roads being a green and lush area during his youth and how it became less so with the landfill and housing development. RENA-CEER is a leader amongst community organizations combating environmental racism.

Rights: Open for research. The Southern Oral History Program (SOHP) welcomes non-commercial use and access that qualifies as fair use to all unrestricted interview materials in the collection. The researcher must cite and give proper credit to the SOHP. The SOHP requests that the researcher informs the SOHP as to how and where they are using the material.

View this interview on the Southern Oral History Program website 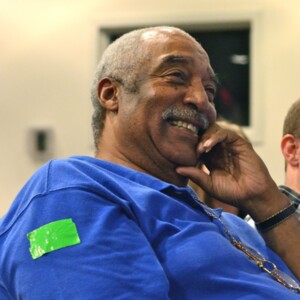 In this interview, the second of two 2017 interviews conducted by Andrea Wuerth, David Caldwell, Jr., discusses his experiences in the newly-integrated Chapel Hill High School. He remembers the difficult early years, describing his accidental role in the riots that took place in Fall 1971, his…
David Caldwell, Jr. - On the integration of Lincoln High School, family, and civil rights

In this interview, David Caldwell, Jr., begins by discussing past generations of Caldwells that came from Chatham County and lived first on Merritt Mill Road, then Durham, then Northside. His family moved to Rogers Road in 1963 when land became available to African-Americans. A major topic is the…
David Caldwell, Jr. - On his parents, civil rights, and law enforcement

"That's what I try to instill, doing what’s right when no one is looking." - David Caldwell, Jr. David Caldwell is a native of Chapel Hill and long time community organizer and activist in the Rogers Road community. Mr. Caldwell brought materials to be scanned during the interview, and large…
David Caldwell, Jr. - On his education, sports experience, and family's involvement in law enforcement and the military