Patricia "Pat" Jackson - On her faith and activism

Interviewed by Molly Norwood on December 6, 2009

This interview is part of the Marian Cheek Jackson Center’s Life History Series. Pat Jackson was born and raised in Chapel Hill North Carolina. She is a current member of St. Joseph Christian Methodist Episcopal Church in Chapel Hill. She serves as a stewardess and motherly figure within the site and aids the Reverend Troy Harrison in his operations. Jackson grew up attending Nevil’s Chapel with her mother and then as time progressed she gravitated with some of her classmates to First Baptist for her baptism and then ultimately to St. Josephs where she has spent all of her time since. During the Civil Rights Movement, Jackson served as an activist within the Chapel Hill community and participated in many marches and protests with a faithful sense of purpose in mind. She shares the importance of women in their church and in the broader community and how active participation in service to the community encourages members to join the Church family and give back. She ponders why society and historical principles encourage a separation of genders that has transcended into religion and offers cultural backgrounds to be at fault. Jackson strives to promote equality in service to the Lord and she lives out that belief in her daily work.

Patricia "Pat" Jackson - On her faith and activism

Oral history interview of Jackson, Patricia conducted by Norwood, Molly on December 6, 2009 at Chapel Hill, NC. Processed by Bowen, Will. 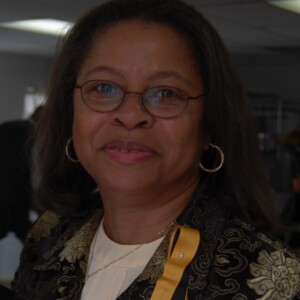 Patricia Jackson grew up in Chapel Hill, NC and has been a member of St. Joseph CME Church for over forty years.  She now works with Wake County Schools and is also a church secretary, a stewardess, and a community activist.  This interview was done as part of the Marian Cheek Jackson Center…
Patricia "Pat" Jackson - On her family, faith, community, and civil rights

In this audio clip, Ms. Pat (speaking with Della Pollock) tells the story of the time she went to Franklin Street and got caught up in a protest at Big John's pharmacy.
Patricia Jackson - Fire Hose

Ms. Pat Jackson gives an overview of her involvement in the organizations within St.Joseph’s CME, starting from when she was a child. This is followed by a discussion of thevarious power dynamic that occur between women in the church, and how to overcome anychallenges that can arise from these…
Patricia "Pat" Jackson - On St. Joseph's CME and women in church

Patricia "Pat" Jackson - On school integration and the significance of churches

Patricia “Pat” Jackson is the daughter-in-law of Mrs. Marian Cheek Jackson, the namesake of the Jackson Center. She brings with her to her interview several clippings from various newspapers, some of which include the first articles her daughter wrote in her journalism career or articles about…
Patricia "Pat" Jackson - On school integration and the significance of churches

“All the sermons that you are hearing, preaching, you are seeing God at work through the elders. Not until then, did you realize that was the relationship with the Lord. You had to give an account to God that he set you up and kept you safe and now I need to get your attention. He got my attention.…
Patricia "Pat" Jackson