Interviewed by Rob Stephens and Hudson Vaughan on October 23, 2007

In this interview, Marian Cheek Jackson describes the origins of St. Joseph's Christian Methodist Episcopal Church and her start as church historian. Jackson discusses the role of her father, Kennon Cheek, and Russell Edwards in establishing the church, the impact of the Quaker church school and St. Joseph's new building plan in 1946. Jackson also describes the racial geographies of Chapel Hill's African American Northside community in the early to mid-1900s; the role of Lincoln High School for the black community and reveals the loss of black businesses and homes due to urban renewal efforts of the 1960s and 1970s and the current revitalization efforts of Greenbridge condos. Jackson closes this interview with information about her work at the funeral home and a discussion of her childhood home and work as the church secretary of St. Joseph's Christian Methodist Episcopal Church.Chap 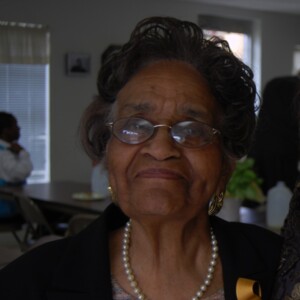 This interview starts with the occupational history for Marian Cheek Jackson. She worked in policy service, data processing, and underwriting for North Carolina Mutual Life Insurance Company for 22 years. North Carolina Mutual is the largest and oldest black insurance company in the country. In…
Marian Cheek Jackson - On her occupational history, family history, and parents