Interviewed by Anastasia Bury on September 1, 2009

This interview provides insight into when she was born, where her family lived, their occupations, and the activities they participated in the church, specifically her uncle. She also shares which black businesses were around. In describing her background she describes how her family lived, where she went to school, who she married and her children. Her kids went to school in Chapel Hill; both went to college and one is a banker while the other works at AT&T; stayed in Chapel Hill. Most of her siblings left but came back to Chapel Hill due to their close-knit family ties. She worked at Wilson Library and at city Regional Planning. She retired after 31 years. She talks about where husband worked and her earlier childhood memories going to St. Joseph and family memories of going fishing with uncle and aunt. Her minister sold land to carrboro for community frangelism event. Geer also speaks on the gentrification and due to greenbridge. She participated in boycotts in Greensboro and in Chapel Hill. Doesn’t want to see Chapel Hill turn into a big city. She likes the sense of village and community and felt like she could make Chapel Hill a better place. She talks about how Black businesses never recognized. Her mother was a storyteller who had all the kids over. Her uncle had a farm tried to plant but had obstacles; husband had aneurism but still alive and well; house use to be the neighborhood house. All of the kids would come over. Both sons played basketball. One son went into college playing while the other son stopped playing in college. Her mother was a great cook and she learned from mother how to be a missionary. She knew that if she kept all kids active to not do something they weren’t supposed to. She recalls throwing rocks at her future husband. She lived in the same house they built 39 years; never knew her grandparents but they helped shaped her parents. Her sons were the only blacks in their nursing school. She shares her love for her grandchildren. The interview ends with her mother's recipe where she would use their homemade butter milk on recipes. Geer believes everyone should feel accepted. 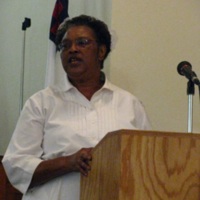