Marching is a core tactic in movements for justice, and one of the most visible symbols of our collective stand.  Jim Wallace’s images of civil rights action in Chapel Hill recall the local history of marching for freedom that was carried on by first grade students from Northside Elementary in 2013, taken up by third graders who staked their own claims on freedom, and reimagined here in one high school student’s detailed collage. In the fall of 2012, Northside residents and friends came together to view and comment on a selection of Wallace’s images as part of the Jackson Center’s Civil Rights in Chapel Hill Weekend. Visitors were invited to write, tell, record, and publically share their recollections of the largely untold history of collective action in Chapel Hill; one noted she had to “sign a vow of nonviolence to march.”   When we visit classrooms, we share the values and visions articulated in the Jackson Center Trust of now over 250 oral histories that have brought the movement home to us.  We sing freedom songs and practice sit-ins.  But first, we all sign a vow to be non-violent. 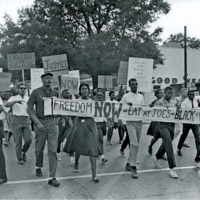 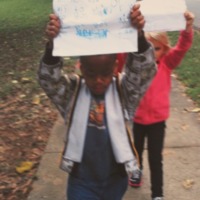 First-graders from Northside Elementary march from St. Joseph C.M.E. church to Northside school as part of a collaborative curriculum with the Marian Cheek Jackson Center. 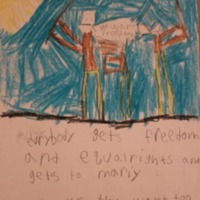 Third grade student at Northside Elementary responds to the question, “What does freedom mean to you?” 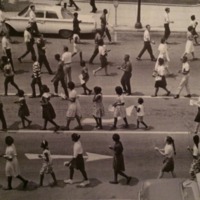 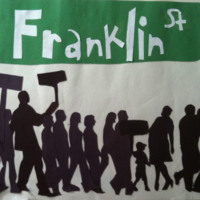