Black and white protestorsboldly joined forces toblock traffic at the busiest intersection on Franklin Street on February 8, 1964.They vibrantly stage the power and vulnerability of non-violence. But the image also teaches us that each picture is only part of larger, interconnected stories of the fight for many freedoms, including freedom to love.

Ruby Council (far right) met the man who would become her husband (far left) in a struggle that was largely focused on equal access to public places. Their love and desire to marry, however, challenged both the public and private inequalities of the law.  They moved to Canada to escape the miscegenation laws that banned interracial marriage, where they still live with their children and grandchildren. We learned of Ruby’s story from her mother, Katherine Council (Mama Kat), whose oral history illuminates the lives of all of her children in their shared commitment to making a livable history for subsequent generations.

Half a century later, inspired by Wallace’s photograph, Leslie Shannon held a demonstration with her friends at the same spot on Franklin St. They stopped traffic as well as part of a continued fight for equality. Leslie’s photograph charges to continue to honor Ruby by making history today. 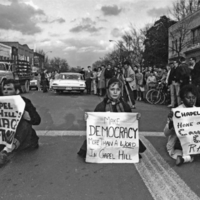 Ruby Council, her future husband, and one more participate in a protest that paralyzed Franklin Street on February 8, 1964. 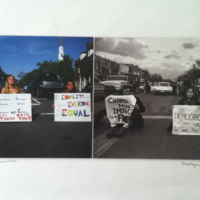 Leslie Shannon responds with her own photo project