William Smith - Speaking about his masonry career and business

William E. Smith, also known as Smitty, grew up in Durham with his parents and seven brothers. His strongest influence growing up was his grandfather, who he spent a great deal of time with – including helping out on his farm in Orange County. He graduated from Hillside High School, which he describes as the #1 school at that time. He began learning masonry in the high school’s trade program, and after graduating, he immediately began working as an apprentice in a four-year program sponsored by the state of North Carolina. He hustled, and completed the program within two years, finishing as a journeyman mason. He worked for twenty years for two different masonry companies locally, building his skills and being promoted to foreman. When work for his second employer dried up, he struck out on his own, starting his own masonry business in 1970 with his future brother-in-law, Grover Webb. In the mid-seventies, he and Grover Webb split up their business partnership, and Mr. Smith went on to run his business up until the present day of this interview. He reflects on how he learned (and continues to learn) masonry, his ongoing desire for new challenges in his work, and how he has taught the trade to others. He describes the way that the masonry trade has changed over the course of his lifetime with advancements in technology, and the difficulty of finding people who want to learn the trade now. He details the diversified nature of his business, including the differences and similarities between rock masonry, brick masonry, and other forms of masonry. He reflects with pride on the legacy he has left in this community, and his sense of personal achievement at having reached so many of the goals he has set for himself in his life. He shares about the experience now working with his daughter, Tiffany Smith, to run the business together, and his hope that his daughter will continue to run the business after his retirement if she chooses. The interview closes with discussion about his enjoyment of hunting since a young age, and some of the mentors who he looked up to and sought to surpass in masonry.

William Smith - Speaking about his masonry career and business 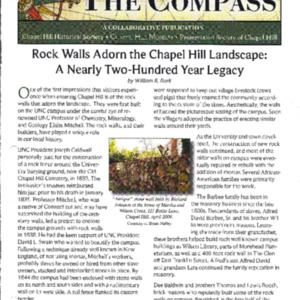 "I’m not a book person […] I like to build things, and then brag about it." - William Smith
William Smith

In this oral history series long-term Northside residents share their personal background and connection to Northside. Most oral histories include their family heritage, education, religious beliefs, and memories of youth. Interviews may also include encounters with civil rights and gentrification.
Collection: Life Histories
Back to William Smith