Stephanie Barnes-Simms - On growing up in Baltimore during the 1960s, family, and education

At the time of the interview, Stephanie Barnes-Simms worked at Self-Help Credit Union. Simms grew up in Baltimore and has lived in NC twice. Her father is from Asheville, NC. Her mother is one of six children. Her maternal grandfather was from High Point, NC and her maternal grandmother lived in Purvis, NC which is located in Robeson County. They migrated to Baltimore as part of the Great Migration. She speaks on her mother’s experience during the Great Depression in Baltimore. They were the only family eating seafood during this time. She talks about the different foods eaten during the Depression such as rice pudding and bread pudding. Her family ended up being the second black family on their road during the 1960s and she talks about shifting black and white neighborhoods in Baltimore. Her mother was a school teacher, and her father was a police officer who worked at the time of the Martin Luther King, Jr. assassination. He lost his wedding ring during his police shift at the riots in Baltimore. She then talks about her educational background and experiences. She was one of two or three black students in her classes in high school that she attended at 12 years old. She attended the University of California at Berkeley for graduate school on a full scholarship.

Stephanie Barnes-Simms - On growing up in Baltimore during the 1960s, family, and education

Citation: Marian Cheek Jackson Center, “Stephanie Barnes-Simms - On growing up in Baltimore during the 1960s, family, and education,” From the Rock Wall, accessed December 8, 2022, https://fromtherockwall.org/oral-histories/stephanie-barnes-simms-2. 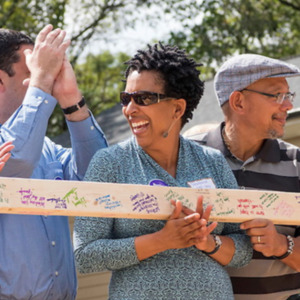 In this oral history series long-term Northside residents share their personal background and connection to Northside. Most oral histories include their family heritage, education, religious beliefs, and memories of youth. Interviews may also include encounters with civil rights and gentrification.
Collection: Life Histories
Back to Stephanie Barnes-Simms