Min. Robert Campbell is a well-known local activist who was raised by his grandparents in the Northside neighborhood. He attended Northside and Lincoln and was in the first desegregated graduating class at Chapel Hill High School (Class of ’67). He moved to Rogers Road in the 1970s where he has been an environmental justice activist, advocating for clean water, a better sewage system, and the closing of the city dump which is adjacent to the neighborhood. He was President of the local NAACP chapter and is now the director of the Rogers Eubanks Neighborhood Association Community Center.

Min. Campbell ‘s family has lived in this area for generations. He was raised by his grandparents who lived on Graham Street in Northside. His grandfather was a mason and built many of the stone structures around town. He learned about the trade by working with his grandfather, and describes Northside as a place where everyone cared for everyone else’s kids and teachers lived in the community. Every kid was known by a nickname or two. Robert went by Peter, his middle name, and since he played baseball with some of the big kids he earned himself the nickname, “old man,” and, alternatively, “Peter Rabbit.” He has vivid memories of other kids in the neighborhood, of being able to work for other neighborhood adults to learn skills and trades. Because he was always interested in cooking, he took a home economics course in high school and was inspired by Mr. R.D. Smith to learn auto mechanics. He describes his high school experience as a very good one, where teachers encouraged contact across the color line and students got along. After graduation, he decided to apply to a Work Corps program in Kentucky where he learned both cooking and auto mechanics. Rather than wait to be drafted, he decided to join the Navy, following friends who did so, and rose through the ranks to petty officer, third class, on a large ship where he literally learned the ropes and later oversaw other sailors. When he returned to Chapel Hill, he worked first in construction, then as a cook at Shoney’s on Franklin St. He also worked at Burger King and at Lenoir dining hall. He attended Durham Tech on the GI Bill but did not graduate. He went through a difficult time and a few caring people convinced him to lose weight and join a church community. There, in a bible study group, he began to see that his talent lay in speaking and advocacy (what he calls “the gift of gab”). He attended various churches and settled on Faith Tabernacle on Rogers Road. His faith is at the root of his activism since he believes we are called to be stewards of the earth. 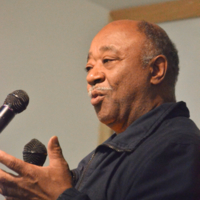 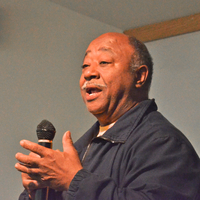 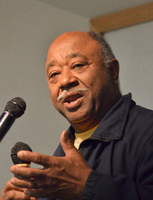 “All God's people coming together and then you hear the voice that said, "I went to the mountain top and what did I see?" I saw all God's people coming together, black, white, red, holding hands and chanting "peace and unity. What do you want? Justice!" And just to hear that echo and look around and…
Robert Lee Campbell - Speaking on his childhood, faith, and environmental justice 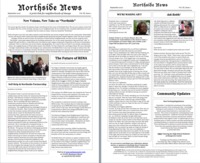