Ezra Barbee - On masonry, his family, and creative endeavors

Interviewed by Kate Sumner on September 19, 2018

This interview is part of the Marian Cheek Jackson Center’s Builders Series. Ezra Barbee, a stonemason and builder, was born in 1957 in Chapel Hill, where his family has worked in the construction and masonry trades for generations. He reflects on his introduction into the trades, and takes pride in his creativity, which flows into his many and varied jobs, skills, and hobbies. He notes his family members’ influence on him, especially his grandfathers, one of whom introduced him to stonemasonry and whom he worked with on many early job sites. He discusses his family’s self-sufficiency, from growing or raising their own food to fixing their own cars, and laments the lack of hands-on knowledge that contemporary young men possess in his estimation. The interview also discusses his creative artistic and musical endeavors, his learning to cook from his mother, and his work designing clothes.

Ezra Barbee - On masonry, his family, and creative endeavors 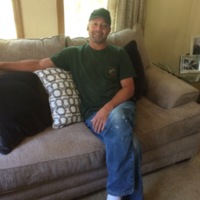 "And at that particular time, my grandfather had a heart attack. He said, 'Well, look, son, I’m going to tell you this: Either you are going to finish this job, or you are going to go home.' So that was my fuel up under my whatever. You can go do it or go home. So, I got it." - Ezra Barbee Ezra…
Ezra Barbee
Back to Ezra Barbee