Interviewed by Della Pollock and MCJC Staff on September 25, 2015

“I tell you young people, stay up with your peers. Never lose track of them.”

Weaver was born and raised in Chapel Hill, NC on Cameron Avenue. His great-uncle bought their family home in 1929 for $3000. He went to school at Northside Elementary. Weaver provides background on who lived in the neighborhood and what school was like. He recounts that in the late 1950s, the majority of streets in his neighborhood were dirt roads. The only paved street during that time was Franklin St. His mother, Mabel Louise Springs Weaver, was a school teacher in South Carolina and an excellent baker in her free time. His father was one of the first two black people in the marines on Paris Island in 1942. He also worked as a staff sergeant for Clayton Barney Vogle for whom the interviewee is named. His paternal grandfather was Arthur Caldwell. His grandmother was Lillian Battle. Fred Battle’s mother and Weaver’s paternal grandmother were sisters. Weaver’s father, James Weaver, worked for the B&O Railroad and was the headwaiter at the Carolina Inn for 41 years. He was a good friend of William Friday and William Aycock. Mabel Weaver quit her school teaching job to raise five kids. Clayton Weaver shares what he learned from his difficulties at Chapel Hill High School in 1963, a predominantly white school. After college, Weaver worked at the Instructional Materials Center at Duke University in 1969. He married Carolyn Bynum in 1968. Carolyn is the sister of Doretha and Tom Purefoy, who used to run the Roberson Street Center (now Hargraves) in the ‘60s. Weaver talks about playing the trombone in band. He notes that “Chapel Hill is not proactive, it is reactive.” His mother was a member of the Social Interests Group Club, a black women’s group started in 1965 that raised money to give high school students scholarships. Emma Mason, Doris Chapman, and Fanny Snipes were the founders of this club. Dip Council was not a founder, but one of the original members of the club. In the 1950s on Franklin St., across from McDonalds to where the Carolina Ale House was situated, there was a black restaurant called the Hollywood Grill. There was also a black-owned cab service called Hollywood Cab next door in the same building. On Weaver Street there was a fish market, grocery, and a tailor shop. This block was integrated. First Baptist Church was originally on Franklin St. Weaver’s first job in television gave him an hourly wage of $2. The average hourly wage was 75 cents or 1 dollar. He owned a brand new 3-bedroom mobile home with his check weekly check of approximately $128.30. He majored in biology and wanted to be a doctor, but decided he wanted a job sooner than later to make money. He finishes the interview with advice to stay in touch with your friends and associates because you never know when you may need their assistance. 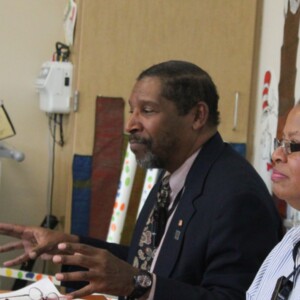 In this oral history series long-term Northside residents share their personal background and connection to Northside. Most oral histories include their family heritage, education, religious beliefs, and memories of youth. Interviews may also include encounters with civil rights and gentrification.
Collection: Life Histories
Back to Clayton Weaver