Skip to main content
Home > Topics > The Struggle Continues: Weaving Histories, Stories, Lives > We Shall Not Be Moved

We Shall Not Be Moved

Each of these photographs represent the “staying power” invoked by the spiritual that continues to sustain struggles for freedom in our town and across the state and nation, “We Shall Not Be Moved.”

The Foster siblings have dedicated their lives to civil and human rights; here, they stand proudly in front of the house their mother built 70 years ago and in which they still live, despite the student-investor pressures around them.

Miss Esphur is a community historian known everywhere in North Carolina for her leadership at UNC’s law school; Miss Charley is a dedicated food justice volunteer and neighborhood leader; Harold became a leader in the local civil rights movement that began when he and a group of friends sitting on the rock wall just blocks from here committed themselves to sit-ins at “Big John”s” drugstore and soda shop in 1960. Artwork from Northside Elemntary students was inspired by families like the Fosters who, according to 3rd grader Simone, “helped save the world.”

Harold is also pictured here with Martin Luther King at Hargraves in 1960, on one of King’s many stops in Chapel Hill on his rallying tour through the South, and in the photograph by Jim Wallace of a protest on Franklin St. led by his good friend, James Foushee. These images and Esphur and Harold’s oral history interview inspired Emma Anderson’s artwork. Sitting on the infamous rock wall outside of Miss Willie Mae Patterson’s home are participants in the Jackson Center’s Fusion Youth Radio (FYR) program. FYR is an opportunity for youth to speak their truths, to claim local leadership, and to build their own staying power. 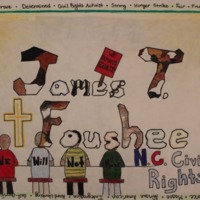 Emma Anderson listened to an interview with James Foushee and responded artistically in her piece. 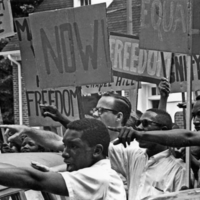 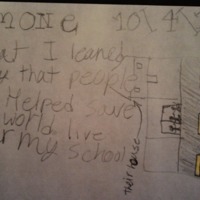 A third grade student at Northside Elementary, reflects on what she learned in a workshop with Jackson Center Staff. 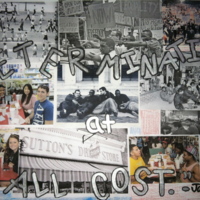 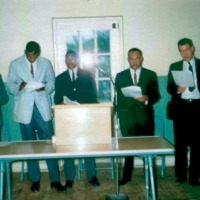