Senator Valerie Foushee discusses growing up in the Pine Knolls and Northside communities with her family. She details her family history, telling about the life stories of her grandparents and parents. Foushee recounts the relationships formed with other families in the Pine Knolls/Northside communities as well as with those in the greater Chapel Hill community. She discusses her experience of attending a newly integrated school as well as her multiple involvements with high school student government, First Baptist Church, and peers from her neighborhood communities. In high school, she participated in sit-ins and later became actively involved with different community centers and programs in Pine Knolls and Northside. She discusses class differences that existed within the Pine Knolls neighborhood, and the experience of growing up knowing she had less than others. She later attended the University of North Carolina at Chapel Hill, where she was an active member of the Black Student Movement and became engaged in student protests. She also discusses eminent domain and the reality of neighborhood community members’ loss of property. She shares her perspective on current state of affairs locally and nationally.

Rights: This material may be freely used for non-commercial purposes as long as this use complies with the terms and conditions of the Creative Creative Commons Attribution-NonCommercial-ShareAlike 4.0 International License. 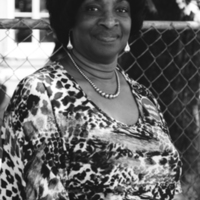 This interview is part of a project of biographical interviews, 1979-2012, with men and women in North Carolina who have made significant contributions to business, the arts, education, and politics. Topics discussed in Valerie P. Foushee's interview include : growing up in Chapel Hill, N.C.;…
Valerie P. Foushee - Speaking about her family, career, and race

This interview is in association with the Marian Cheek Jackson Center’s Life History Series. Senator Valerie Foushee, born May 7th 1956 is a lifelong member of the First Baptist Church. She began attending First Baptist at the age of two when her grandmother would bring her and her siblings to…
Valerie P. Foushee - Speaking about her faith, church, and family