FRANgelism in the Park was the collaborative inspiration of Rev. Troy Harrison of St. Joseph C.M.E., pastor from 2004-2012 and national gospel impresario, Buddy Baldwin, a nephew of Mr. Henry Baldwin.  Providing free food, song, and spirit to everyone who wanted to join in, FRANgelism took place in Baldwin Park in the Northside Lloyd/Broad neighborhood.  Baldwin Park was named after Henry Baldwin, who had owned a saw mill that once spanned the property that now still proudly bears his name.  Mrs. Marian Cheek Jackson describes FRANgelism as part of Rev. Harrison’s greater vision of a church without walls:

"Reverend Troy F. Harrison, Sr. helped us to understand that the work of ministry is "outside of the walls of the church" as we lead the way under the leadership of Bro. Buddy Baldwin and the Church Family sponsoring one of the largest gatherings of the best Gospel Singing Groups on this side of Blue Heaven held each year on the 2nd Saturday in September evangelizing to the community at our FRANgelism (friends, relatives and neighbors) in the Park."

The location of FRANgelism in Baldwin Park symbolized deep connections between the past and present.  Henry Baldwin was one of the founders of St. Joseph C.M.E.  Mrs. Marian Cheek Jackson describes the church’s origins and the perseverance and faith of its congregants in the Historical Sketch below (now regularly updated by her daughter-in-law, Mrs. Pat Jackson):

“Two years prior to the beginning of the twentieth century, amidst all of the other Houses of Worship, there was still a void that wasn't being met here in Chapel Hill, North Carolina.  This was the spiritual needs of the transplanted members of our mother church Hamlet Chapel CME Church, Pittsboro, NC.  At this time the late Mr. Henry Cotton, his family and several other local families dedicated themselves, rose to the occasion, and contacted the proper authorities of the North Carolina Conference of The Colored Methodist Episcopal Church.  The late Reverend J.W. Roberts, Presiding Elder, met with the dedicated few, and a church was organized and named Cotton Chapel C.M.E Church (in honor of the late Mr. Henry Cotton), with the Reverend Roundtree as its first pastor.

With faith and plenty of spirit, but little capital, this church was erected but was later destroyed by fire on a Sunday night before evening services.  However, at this time the membership had greatly increased and they refused to give up.  With Messrs. Henry Baldwin, Kennon Cheek, Jasper Robinson and Nathan Jones in the lead, assisted by the late Reverends G.W. Flack, J.C. Staunton, Cliff Roberts and the unselfish help of many friends in the community, Cotton Chapel C.M.E. was rebuilt on the same spot.  It was a well-built frame church and was considered one of the most modern Black Churches in the area.  Our membership continued to grow; conference claims and other obligations were paid on time, and we were considered to be one of the leading churches on the Durham District of the North Carolina Conference.

Under the leadership of the late Reverends Cliff Roberts, James Ross, H.C. Washington and Charles Golphin our church moved forward. During the latter part of 1929, the Conference felt that with the massive changes of the time we needed younger leadership that could more ably handle the complex financial dealings of the Church.  For this reason the Reverend Nelson Crisp Sr. from the Kentucky Conference was sent to us.  For almost a year we moved forward making great progress.

Heartbroken but not discouraged, we were given permission to worship in the old Quaker School building at no charge.  While worshipping in the Quaker School building for many years we were able to save money to purchase land for a new church.  At the same time Afro-American Leaders were also looking for land for a new High School.  Brother Henry Baldwin and Brother Kennon Cheek being active in community activities were also involved with other Leaders searching for a new High School.  After several months of study, property on Rosemary Street was selected.  Brother Henry Baldwin and Brother Kennon Cheek, along with other Afro-American Leaders, thought this site was too small for a High School so they, along with other Leaders, were able to find land on Merritt Mill Road that was suitable for a High School, we were given the first chance to buy the land for our church.  Brother Henry Baldwin, Sister Margaret Burnette and Brother Kennon Cheek mortgaged their homes along with the little money that had been saved to make a down payment on the land where our church now stands.” 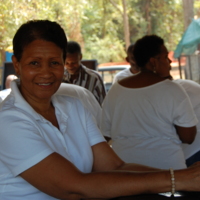 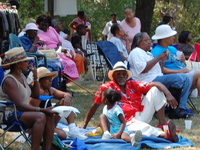 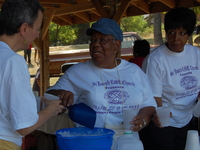 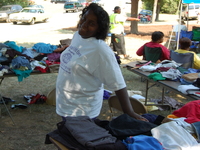 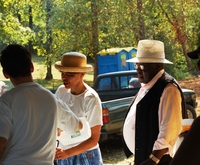 Marlou Pippin
Back to all Topics